Previously in the story 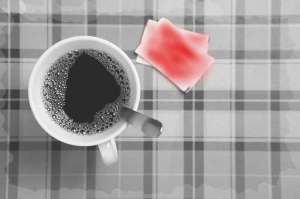 We met a little girl with a big forehead (Note 4). Then we found out she has sticky fingers with an aftertaste (Note 5).  But we still need to know is her mom really dead  (Note 6) and  more importantly why does she steal Sweet n’ Low?  Read on to find out more about THE GIRL BEHIND THE EGGHEAD.

Egghead dropped her backpack on the floor. The bag of bricks put a another dent into in it. “Shit!” Rosie’s going to be pissed?”

Egghead started calling her Mother’s mother by her legal name the day she decided the woman needed to die. Unloading her coat off her shoulders, Egghead let it drop on the floor. It did cover the injured rotting wood but Rosie hated things out-of-place and Egghead knew it. So she left the lost cause for an after-school snack. But first she emptied her pockets, tossing her treasures with the pocket lint from her jeans on the table. She sighed as she surveyed the pink mound in front of her. Each packet of Sweet ‘n Low was so small but they added quickly.

“Step by Step you can walk a mile.” Mrs. Swansen, her home room teacher, had explained this basic principle of success to the class. Egghead hadn’t been listening, she’d been too busy doodling because Mrs. Swansen affirmed each class with positive tidbits and educational annoyances. Like any Disney character, Mrs. Swansen had big rounded eyes and chirped her barks, even her nose was perky. In fact, Egghead was trying to master that pug nose on her notebook, when he walked into the classroom. He carried a brown paper bag in his strong thick hands. Egghead followed the hand to the forearm and massaged his bicep in a quick fantasy. Egghead wiped her mouth with edge of her sleeve; looking away as if she were not starring. In her peripheral, she watched the dark-haired god give Mrs. Swansen the bag and a peck on the snout. Egghead returned to the first words on her Notebook page, the ones she wrote before drifting into doodles, because the woman knew how to walk a hot mile.